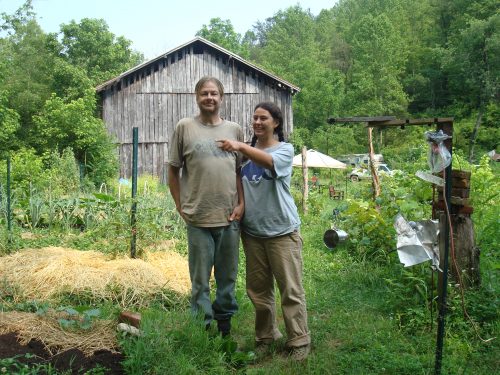 ARTICLE by Wille Davis: Scott County, Virginia was once a hub for big tobacco farms, and its location nestled between two coal rich areas provided an opportunity for residents to work in the mines. Once the income from the tobacco industry and the coal companies dried up, however, the county suffered.  The population has been shrinking since 1990 and over twenty percent of the residents live below the poverty line. Filling the void these tobacco farms left are small self-sustaining farms.  With small farms come small farm problems.

For instance, like many small farmers, Hamilton and Hess had a problem leaving out water for their chickens. Leave too much water and it becomes dirty and unsanitary, leave too little and they can practically never leave the farm because they have to constantly replace the water.

Mark Hamilton artfully solved this dilemma with an invention he calls The Avian Aqua Miser, a nipple on a plastic container that allows chickens to drink the water only as they need it, a drop at a time. “At first, I didn’t know what I was doing,” Hamilton says, referring to an aborted draft of his invention. He then noticed that larger commercial farms had been doing something similar. “Big industrial farms overlooked the small guys, the people who only had one, two, three chickens,” he says. “It didn’t seem right that people had dirty chicken water. We wanted to help them out.”

They knew they had a winning idea, but the problem was how to sell it. “People told Mark, go down to the Farmer’s Market, sell it that way,” Hess said. “That means you have to haul it down there, set up a booth, and stay there constantly.  But the Internet is at the booth all day.”  She laughs, but she’s making a serious point.  By selling their ideas on the Internet, “We were able to pay ourselves a living wage, not just minimum wage.  That’s hard for a lot of people around here to do.”

Because the Scott County Telephone Cooperative provides high-speed Internet access to the Hess/Hamilton farm, they have been able to sell the Avian Aqua Miser to all fifty states and as far away as Greece, Australia, and Japan. In today’s economy, having a marketable idea isn’t enough, you need to market it. That means finding your customers, even if they’re on the other side of the world. “We thought it was only going to sell to farmers,” Hess says. She was pleasantly surprised to find that all sorts of people wanted to buy it, even those who live in cities due to the urban homesteading movement.

Most everyone agrees that high-speed Internet access is advantageous to rural areas, but getting service to rural customers is another matter. Many Internet providers don’t think it’s profitable to cover remote areas where the houses are spread apart and the people don’t have much money.  In response, Hess tells of two friends, a married couple from Colorado. “These were just the sort of people the Chamber of Commerce would want to move here. Well-educated, good money.  But there’s no way they’d relocate to a place without high speed Internet. We had Broadband, so they came.”  Now, she says, her friends go out of their way to support local businesses and the community at large.  The point, she implies, is that investing in rural communities eventually pays for itself.

Access to high speed Internet also enabled Hess and Sherman to start a business with almost no resources. “When we started we were on a shoestring budget. Less than a shoestring.”  They had only five hundred dollars in the beginning.  They hope to act as models for Appalachian youths who have good ideas but few resources and think they have to leave home to be successful. “Work for a summer, you can make five hundred dollars.” Hamilton says. “If you have enough desire, that’s all the money you need to get started.”

“We’re not looking to get rich,” Hess says, “but we wanted to make enough money to keep body and soul together.”  Their invention has offered them economic freedom to devote their time to what they really love – their farm. Hess grew up in the outskirts of Bristol, and she felt connected to the Appalachian land from a young age. “We moved away from a farm when I was too young to do the hard work.  The farm to me was eating great tomatoes, playing in the woods.  We moved to the city, and all I could say was ‘Mom, where are the great tomatoes?'”  The biological diversity of the area kept her close. “Here we are land-rich even when we’re money-poor.â”

Mark Hamilton had a more circuitous route to Scott County. From Ohio originally, he moved around the country, setting up camp as far away as Albuquerque and Boston. “I was kind of a drifter.”  He speaks slowly and gives the impression that he is careful with his words. “I was looking for something, and I guess I found it.”

“We think it’s paradise here,” Hess says, waving her arm around to indicate either the farm, Appalachia, or both. “The people who leave the mountains, they still think it’s paradise, but they don’t think there are any jobs or opportunities.”

With innovative ideas, and the right tools in place, maybe local residents won’t have to separate their paradise from their daily bread.

Read a version of this article on the Daily Yonder

Reprinting this article or content with attribution is welcomed. Contact Mimi Pickering, mpickering at appalshop.org, 606 633-0108, for more information on publishing and high resolution photos. A word doc of the story is attached.

This work is licensed under a Creative Commons Attribution 3.0 Unported License.

Using Ingenuity & Internet to Stay on the Farm 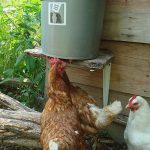 Sharing the Spirit of Appalachian Kentucky 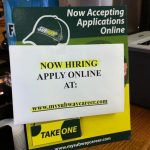 Broadband: Crippled Without It?